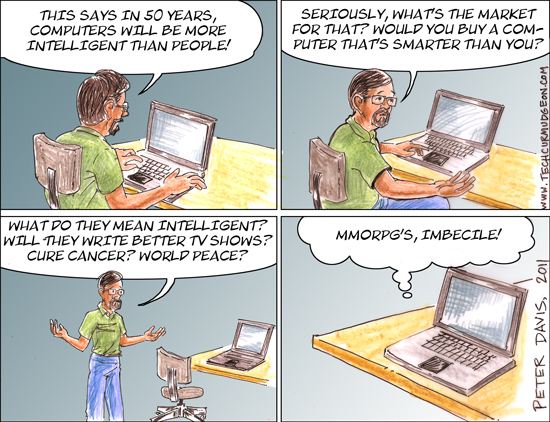 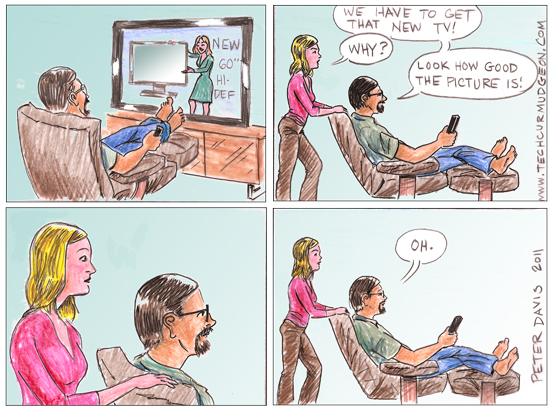 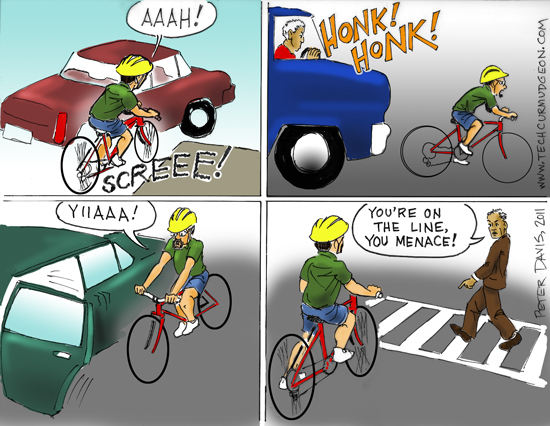 Why I Should Be the Next CEO of Apple

Let's face it.  Tim Cook is probably a very competent executive, but he's no Steve Jobs.  Seriously, have you ever heard of anything he's done?  He's not the the industry-shaking innovator that Apple needs.

I, on the other hand, have loads of ground-breaking ideas.  And I can draw them!  If that doesn't make me a visionary, I don't know what does.  Here is just a handful of my game-changing innovations... 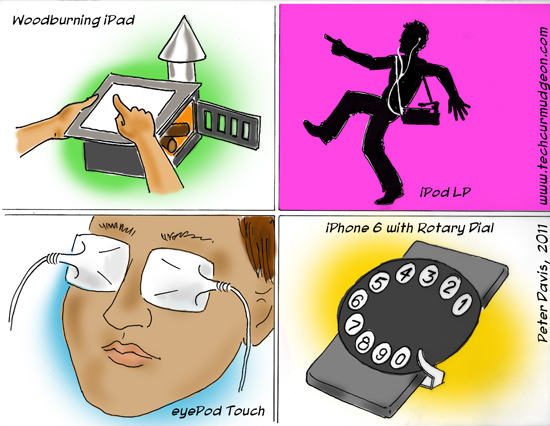 So let Apple know you think I should be the next CEO.  And if you're on Apple's board, vote for me! 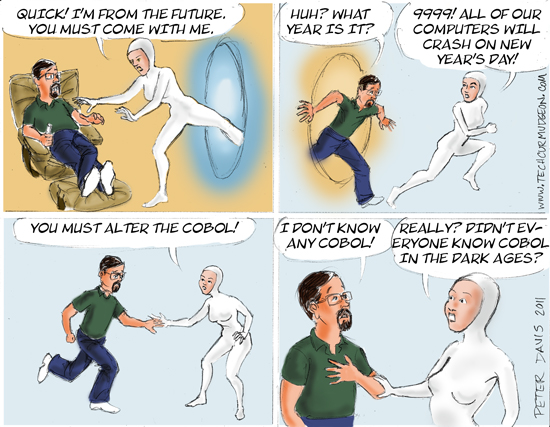 Please try later.
Posted by Unknown at 7:38 AM 0 comments

The Singularity is coming, probably in the next 30 to 40 years. At least, that's the time frame suggested by the futurists, scientists and writers who have popularized the idea. The Singularity, by the way, is when man-made intelligence exceeds human intelligence. (Though there are plenty of highway drivers today who would not stack up too well against a modern electric toothbrush.)

The big question, of course, is "What IS intelligence?" What exactly will these super brains do better than we do? There's no dodging that question. Machines do what we design them to do. So what will that be? Design them to create even better machines? Better in what way?

Will they make better TV shows? And if so, who will enjoy them ... us or them? Are we really going to build machines that can write new episodes of Hot in Cleveland? And what will the commercials advertise?

How about governing? Surely that's one of the most important problems humankind has to solve ... how to govern. Can we create robot world leaders? Would they show a shred of warmth and humanity, or just be like Al Gore?

They could probably cure cancer, AIDS and flatulence, but would they? These highly intelligent robots wouldn't suffer from any of these conditions. Will they see any benefit to keeping a bunch of flesh and blood beings around?

Wouldn't it be simpler for them to just take over the world? Science fiction books and movies have warned us about this for decades. But really, just the way Microsoft dropped support for Windows XP, sooner or later the robots are going to drop support for Human 1.0. We'll be too obsolete and expensive to maintain. You'll try to get help with some human problem, and get connected to a robot with an Indian accent halfway around the world.

But it's inevitable. Futurists are looking at trends in technology, and the rate at which things change. The signs are already there. My computers spend way more time upgrading themselves than doing any actual work. If that's not superior intelligence, what is? 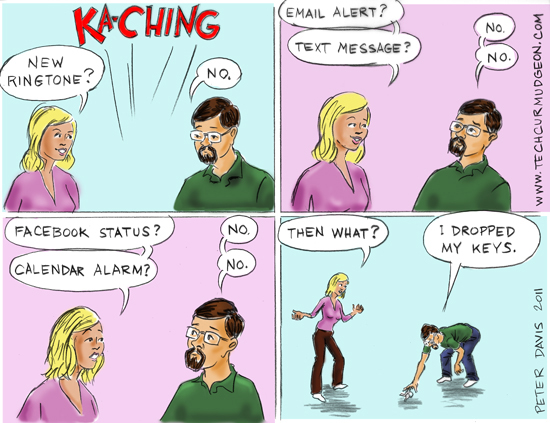 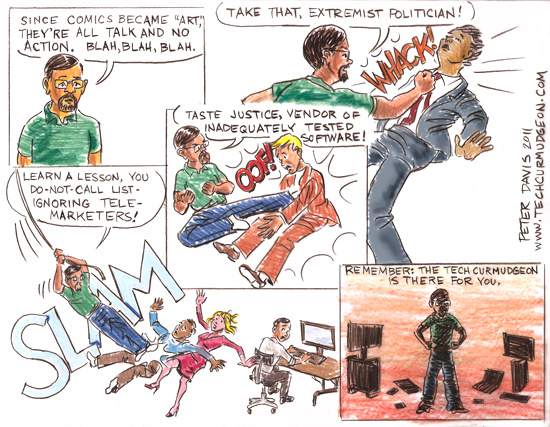 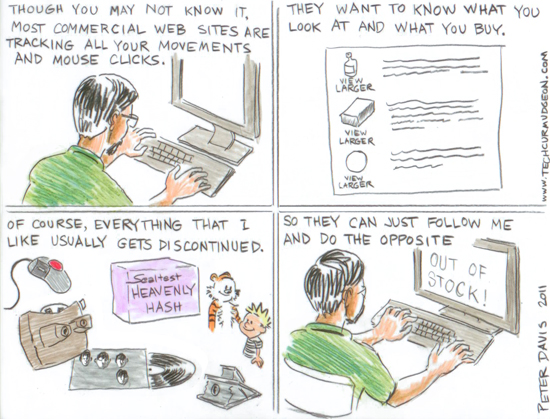 The phrase "agree to disagree" is commonly used to dismiss arguments and debates between people with irreconcilable viewpoints. In essence, the phrase means the two sides will never see eye to eye, and everyone should just move on.

In the U.S. Congress, however, that approach has become standard operating procedure. In the recent debt ceiling debacle, the only way to pass any legislation at all was to get both sides to settle their differences later. The final settlement will be done with pistols at sunrise or, more violently, with a congressional super-committee.

To get the fireworks going promptly, all of the Republican appointees to this committee have signed the "no new tax" pledge. Basically, this means they've sworn not to consider all the options. It's kind of like a criminal trial where half the jurors have already promised not to find the defendant guilty.

Democrats meanwhile, in a characteristic show of strength, have not managed to appoint all their members yet.

This committee will have to decide how to trim $1.5 trillion from the federal budget over the next decade. This task is complicated by the "no tax" pledge, the latest economic events, and the recent Netflix rate increase.

The committee has until Thanksgiving to complete its work and come up with a mutually agreeable plan to solve debt problems. If they can't agree (What are the odds?), then a bunch of automatic cuts will kick in, causing Democrats to howl and Republicans to sniff indignantly. With this powerful incentive, we can be sure the committee will be just as productive and non-partisan as the last round of deficit reduction talks.
Posted by Unknown at 10:13 AM 0 comments

As recounted in the movie, The Social Network, Facebook founder Mark Zuckerberg originally created a site called Facemash, in which viewers were shown pairs of photos of Harvard students and asked to pick which one was hotter. To update this concept, we'd like to use more familiar faces from TV.  So here's our TV Facemash.

ABSTRACT
We present Carlin Notation, based on the research done by late George Carlin. In his published findings, Carlin was well known for, among other things, enumerating the seven dirty words you cannot say on television. This research built on work previously performed by Lenny Bruce1 and others, but there's no evidence that expletives had been enumerated and classified prior to Carlin's publication. Indeed, Carlin pointed the way to a taxonomy of obscenity, although further research is needed.

Based on Carlin's work, we are proposing a shorthand notation for specifying individual expletives from the catalog. Using this notation, it's possible, for example to indicate the "F" word as Carlin[3], or simply C[3] or C3. Other curses may be referenced in a similar manner.

This notation also permits the concise representation of complex linguistic constructs.  For example, the expression


C6-"er"+"ing" C5
may be commonly heard in many high traffic urban areas.

Note that the convention among computer scientists is to index arrays and lists starting from 0. However, the general population, an important beneficiary of this notation, finds this practice nerdy, to say the least.  Therefore, we have reserved index 0, C0, to refer to *expletive deleted*.

We believe Carlin Notation will enable the algebraic and symbolic manipulation of adult language, and can therefore contribute to our understanding linguistics and cognition.

1Bruce, Lenny, How to Talk Dirty and Influence People, Playboy Publishing, 1963.
Posted by Unknown at 5:56 AM 0 comments

How To Be a Total Geek 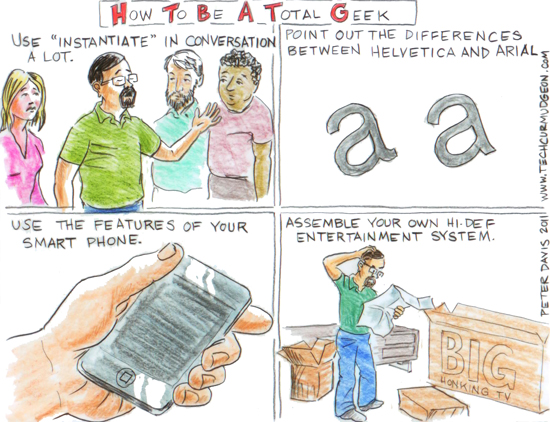