Republicans see the world as they would like it to be. Everyone who works hard gets rich, or at least comfortable. And everyone fits in if they deserve it.

Democrats see the world as it actually is. We are all human. Some are economically disadvantaged, despite hard work. Some get sick. Some have nuanced sexual identities. Some develop addictions. Some choose to serve others rather than just themselves.

As far back as I can remember, I wanted to be Superman. I mean, what could be better than that? Even the Fortress of Solitude seemed very appealing to my naive imagination.

But it would have required moving to another planet with less gravity and a different colored sun, and that seemed impractical. Batman, being an ordinary man, was much more within reach, but I learned that he had a gym in the Bat Cave and worked out a lot.

A little later, I wanted to be the Beatles. Anyone one of them would do, but I think John was the preferred choice. I spent hours strumming on badminton rackets and drumming on overturned wastebaskets to prepare for this.

At about the same time, I wanted to be James Bond. I guess I was a confirmed Anglophile. Why not both? I could be a secret agent who is also an international rock star. That was the perfect cover.

Of course, back then, I thought the idea of supervillains bent on destroying the world was just fiction.

After that, the ambitions became more mundane: astronaut, genius, groundbreaking psychologist. (Somehow, sports star never made it onto my list.)

By the end of high school, I got into the whole universe thing and wanted to be a physicist. Once I got to college, though, I saw that the theater people were having much better parties than the physics people. Plus, there are way more famous actors than physicists.

After college, I moved back in with my parents, which convinced me it was time to get a job of some kind. At the time, it was very easy for a theater major with a tiny bit of computer programming to get a job as a software developer. (Still is, I think.) So, that was that.

Software development was great fun at first. I got to type things that would make tapes spin and stuff appear on the screen. But after a while, I realized I was writing the same things over and over again. Stuff I had done in Fortran now had to be written in Pascal. Or C. Or C++. Or Java. Or PostScript. Or JavaScript. Luckily, I was only 40 years from retirement.

Did I give enough love?

The Adventures of Cancer Patient 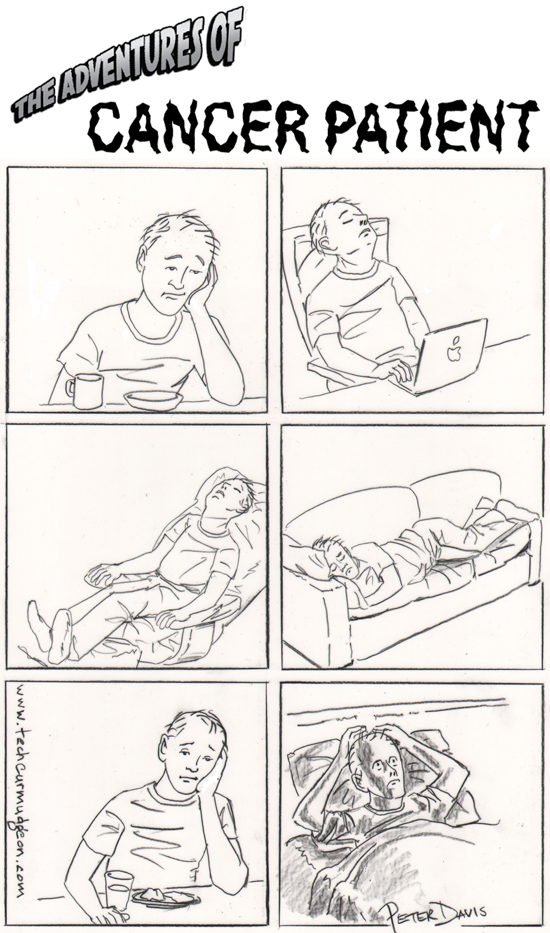 Why I Hate Writing

I used to think writing sounded like a pretty good job. What’s not to like? You sit around in your garret, or on a balcony overlooking Waikiki Beach, or wherever and jot down whatever pops into your head, while the money just keeps piling up in your bank account. (Writers generally start out in a garret and upgrade to the Waikiki balcony at a later time.)

But now I have a more mature, nuanced view: Writing sucks!

First, there are two kinds of writing: fiction and non-fiction. Fiction is about telling engaging stories, with relatable characters, and then selling the movie rights. It all sounds good until you sit down to try to do it. There are plenty of stories around, so you don’t even have to make one up. It’s considered acceptable to re-tell existing stories, even well-known ones. Shakespeare did this, and he’s the greatest writer who ever lived. If you’re desperate, you can use something that actually happened to you (if anything ever happened to you, which is unlikely if you’re holed up in that garret all the time.)

The problem is that you have to drag it out. You can’t just say “Pinocchio’s nose grew when he lied, so he learned not to lie and became a real boy instead of a politician.” There! End of story! Why drag it out for pages and pages, with all kinds of other characters … a fox and a cat and a mean old circus owner. Really? Seems like Collodi went to a great deal of trouble for something that could be said in one sentence.

And then there’s the problem of characters. You can’t just use your mom or your brother or your best friend because they’ll never speak to you again (which might be a good thing if you’re easily distracted from writing.) In general, it’s a good idea not to piss off your friends and family. Who else is going to read your stuff?

So let’s say you come up with some characters. Again, you have to drag it out. You can’t just say “Tom Sawyer, a brash young man, and Huckleberry Finn, his independent-minded friend, had a naive love of adventure which led them into many scrapes.” Instead, you have to describe all the things they said and did, and let the readers figure out what kinds of characters they are. What a pain!

Non-fiction is easier in that sense. You just write about what you know. But know is the operative word here. You have to know something. You could, of course, just make stuff up, but then it has a tendency to become fiction. Or politics.

Luckily, however, you don’t have to know much to be a non-fiction writer. Take a look at the books that are out there and you’ll see what I mean. Donald Trump has a few books out, and nobody’s more ignorant than that.

I guess the best thing is just to write a memoir. You just describe stuff that happened to you (when you weren’t in your garret.) The only problem with this is … nobody cares.