I want to apologize to generations X, Y, and Z, millennials, and to all future generations, for leaving the world in so much worse shape than when we inherited it. I’m sorry.

My generation had high hopes at one point. We were going to end war, protect the environment, and maybe even add some compassion to the Capitalist system that was growing increasingly indifferent to human needs. We really had good intentions.

But we got busy. We had to finish school. Then we had to move out of our parents’ houses, and that meant finding a job of some kind. Then, unexpectedly, that turned into a thing of itself. Jobs turned into careers. Income turned into assets. And somehow, we started to want some of that comfort that we used to put down the previous generation for.

We still wanted peace and a wholesome environment and all that, but now we thought maybe we could earn enough to give money to these good causes. Better yet, maybe we could invest in good causes, so we’d make money off other peoples’ good deed doing. Nothing wrong with that, right?

But somehow, it all got screwed up. Somehow all these good deed doers we were investing in didn’t manage to save the world as we intended. Sure, they made progress. They learned about and studied global warming, but they didn’t manage to convince everybody. They developed new technologies for education, and even new cures for diseases, but those are never-ending jobs. They even championed policies and politicians who backed all the right stuff, but we see where that led.

So, I guess the bottom line is, on behalf of my generation, I’m sorry.

Most of the objections to and outrage at the Trump administration can be understood in light of the concept of America, a concept that Trump and his people reject.

Briefly, the U.S. Constitution embodies a set of ideas about what kind of country the founders envisioned. Largely in reaction to Europe’s history of monarchies, and to England’s King George III in particular, the U.S. was to be, as Lincoln later described it, a country “of the people, by the people and for the people.”

The Declaration of Independence actually lists the reasons early colonists threw off the rule of England, and they all had to do with inalienable human rights, government by “consent of the governed,” and the right of the people to choose a government that will see to their “Safety and Happiness.”

This whole American concept, that government serves the people and not the other way around, was a radical departure from the thousands of years of human history that preceded it. The whole world sat up and took notice. This, above all, is what made America great.

But the Trump crew completely reject this concept. They are secretive, self-serving, and utterly inaccessible to ordinary citizens. Trump regards himself as an absolute monarch … utterly infallible and above the law. He acknowledges no obligations to his supporters, his colleagues in government, the Constitution or tradition. He is King Donald.

Many Republicans want to turn back the clock to a time before FDR. Trump wants it back to before George Washington.

Fortunately, many Americans still remember and cherish the American concept. Many still long for real liberty and justice, and not mere words in an incoherent speech. This is why so many people have been chanting at their representatives, “You work for us!” And many government officials, perhaps even some Republicans, actually comprehend their duty to the people and the law.

May the reign of King Donald be as short as it has been disastrous.

(Apologies to Rodgers and Hammerstein)

Listen, my children, and you shall hear ... 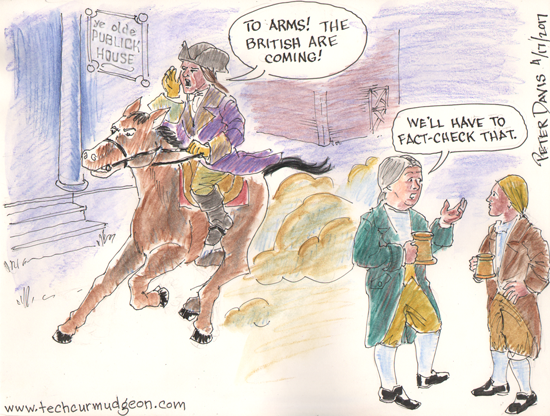