If you’re a Hillary supporter, I’ve got nothing to say to you.

If you’re a Trump supporter, I have even less for you.

I want to talk to the others … the undecideds, the disaffected Bernie-philes, even the Gary Johnson-ites and the Jill Stein-likers. I’m not just going to say the usual crap about how your vote matters. It matters more than most.

I don’t need to tell you this is a very weird election year. It’s the Reality TV election. We don’t just want our candidate to win. We want the opponent to be voted off the island. To be fired.

Because, let’s face it, this country has become more polarized than it’s been at any time since the last Presidential election. We don’t simply favor one set of policies over another. Ha! How laughably quaint.

No, we’re convinced that only our candidate is even fit for office. We steadfastly cling to the belief that anyone but our candidate would destroy the country and plunge the world into war. Of course, that’s only true of one of the candidates.

Voters rarely base their decisions on the issues. Ordinary Americans can not be expected to weigh the kinds of complex trade-offs between helping families and children versus expelling 11 million immigrants and building a wall to keep them from coming back.

Instead, we like to vote on personality. Each candidate is really a character we’ve come to know, and we love them or hate them based on their roles.

Jill Stein, for example, is the self-righteous better-than-thou environmentalist. “What? You threw out that coffee cup?”

Gary Johnson is the happy-go-lucky doofus. Barney Fife on drugs.

Hillary is the Energizer Bunny. Or maybe Lucy, trying to keep up with the conveyor belt of lies and fabrications about her.

And Trump, of course, is Ralph Kramden. Fred Flintstone. All the bellowing and tantrums, but none of the charm.

So vote for the cartoon character of your choice, but vote! 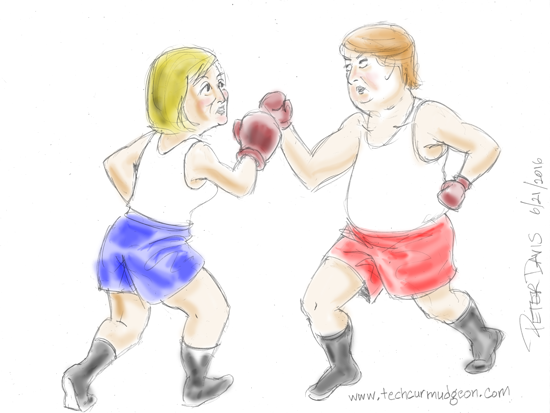 None of us lives in reality. We all inhabit mythologies of our own devising. We build up these mythologies slowly, inexorably over the course of our lives. We start by piecing together the bits of information from our own experience, and what we see and hear from others.

After a while, though, these mythologies become self-sustaining. We begin to understand new information in terms of the beliefs we already hold, and even reject any information that contradicts them. You can see this in people’s most fervently held, unshakeable beliefs.

For example, many conservatives believe Democrats are out to take their guns away. This persists despite the fact that no one has ever taken any legally owned guns away, or even suggested doing this. Gun control advocates only propose making it harder for dangerous people to buy guns, but the “take away our guns” myth lives on.

Likewise, many liberals believe that government regulations and agencies can completely solve many problems. They advocate environmental regulations and treaties, while at the same time driving SUVs, consuming food and beverages from plastic packages, and dumping last year’s electronics in landfills.

On the other hand, conservatives believe government can’t solve anything, and that we’re much better served by private industry and the free market. This ignores the revelations that the sugar industry conspired to spread false information about the health risks of sugar, or that Volkwagen actually engineered a way to cheat on emissions tests. And then there are the banks!

A lot of educated people think that science is infallible. Maybe in theory, but like anything else done by people, it’s subject to mistakes and dishonesty. And of course, new information is constantly blowing away old theories. The “everything goes around the earth” idea worked pretty well for thousands of years. It was only after we started making more observations of the stars and planets, making the calculations much more complicated, that Copernicus said “Hey, you know what?
Everything is much simpler if we think of everything going around the sun.”

On the other hand, while not infallible, science is pretty damn good! In terms of predicting what’s going to happen, or designing things that work, nothing beats it. And in fact, science is about the only way to punch holes in these mythologies we inhabit and to get a glimpse of real reality. So just ignoring science, as with evolution or climate change, is about is ignorant and closed-minded as you can get.

I’m sorry. I tried many ways to make this funny, but it’s just not happening.
Posted by Unknown at 12:00 AM 0 comments

WTF Tuesday: How did a one time Theater Major wind up as a code monkey?

We haven’t done anything for WTF Tuesday for a while, but today, we have an actual living, breathing question to respond to. Following my Close Encounters post last month, B.C. of New Hampshire asks:

How did a one time Theater Major wind up as a code monkey?

Although several of my theater colleagues went on to enormously successful careers on stage, TV and movies (and even more to modestly successful careers, and some to pretty paltry careers), the odds of making any money as an actor, let alone making a living, are still slim.

Being an aspiring actor in New York typically means:
In fact, restaurant-goers should check Backstage to figure out when their favorite dining spots will be short-staffed.

Away from New York, an actor’s life consists of:
But as usual, the truth is more complicated. I started college as a Physics major, but quickly proved that theatrical cast parties are more fun than Physics labs. I drifted through Computer Science and Psychology on the way to being a full-fledged Theater major.

In Theater, unlike perhaps any other field, your whole self, body and soul, is your instrument. You must learn to master all its complexities and subtleties. You spend a lot of time on introspection … on understanding just what kind of person you are, what your capabilities and sensitivities are. You do exercises to access your inner emotional life, and to try to adapt your personality to various characters you might be called on to play.

Naturally all this self examination and soul searching leads you to understand certain things about yourself like, for example, the fact that you’re not a very good actor.

That and the making a living thing.

1 West of the Mississippi, trying to get to L.A.