Steve, Jackie and AMNOZ had no idea what “shvoot” meant, but the approaching pack of wild dogs gave it a sense of urgency. That and the gestures from the man who had appeared in the hatch of the structure convinced them to climb up there. Unfortunately, the only way to get up was by climbing on top of AMNOZ. He was pretty complacent about it, though, of course, he could not climb on top of himself to reach the opening.

As the yelping and howling grew louder, Jackie bounded on top of AMNOZ and then into the access hatch on the underside of the structure. Steve was hesitant, but the arrival of the wild dog pack seemed to provide the motivational message he needed. Somewhat less gracefully, he clambered on top of AMNOZ and kicked and flailed as Jackie and the strange man struggled to haul him up just as AMNOZ was engulfed in teeth, fur, noses and … well, mainly teeth. Fortunately, even these near starving animals had little interest in the old office furniture and electronics that made up AMNOZ.

Inside the structure, Jackie and Steve regained their composure enough to regard the strange mix of sterile looking technology and jury-rigged gadgetry that surrounded them and their host. “Holy crap!” whispered Steve.

The strange man cocked his head slightly and drummed his fingers on his temple. “Sprechen sie deutsch?” he asked. 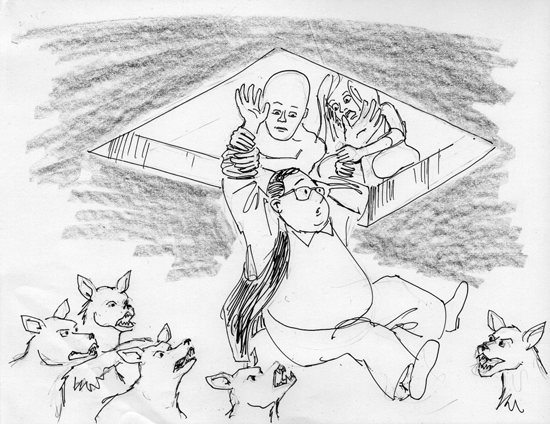 Poor Obama can not be as nice as
He wanted to be before ISIS.
He’ll pummel them well.
The Committee Nobel
Never makes winners give back their prizes.

I’ve been reluctant to post this, because I realize that fully half of all blog posts are apologies for not posting more regularly. But timelily enough (So what is the adverb form of “timely?”), the New York Times this week talked about the situation of bloggers who are feeling oppressed by the onerous task of trying to keep their blogs up-to-date. The fact is that bloggers can easily be overwhelmed by the responsibility of having to provide high quality content day in and day out. (Luckily, my readers know I’m under no such burden.)

But I do want to offer at least a few lame words of contrition.

In brief, I’ve been busy. In addition to my full time day job, I’m undergoing daily radiation therapy for prostate cancer. I was also taking an evening class at a nearby university, but I had to drop that. And as if that weren’t enough, the radiation therapy has side effects, including digestive disorders, fatigue, and a peculiar attraction to women in scrubs.

Seriously, on the the subway, I look right past the fashionistas and the hipsters, and find my attention drawn to those women with hospital IDs dangling from the drawstrings of their baggy blue pants. I find myself leering at them, my mind reeling with dark thoughts like “I wonder if she would be good at positioning the treatment table.” My pulse races at the thought of having them take my pulse. I just want to throw myself at their little paper bootie clad feet and be taken care of.

The point is, things have been weird. 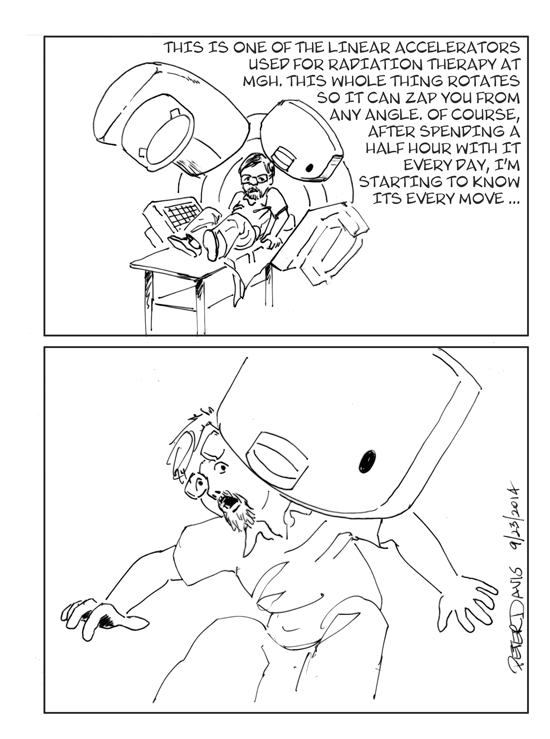 Jackie and Steve blinked at the black and white panorama before them … blinding sunlight alternating with impenetrably dark shadows. The massive crumbling structure overhead offered no middle ground between complete exposure and complete obscurity. The structure itself revealed only white or black surfaces, depending on their angle towards the sun.

The structure, supported by regularly spaced columns, seemed to stretch toward the horizon in every direction, but with jagged irregular gaps, peirced by daylight, throughout. Large and small chunks of what appeared to be the same material as the rest of this ediface lay on the ground, also limited to black and white faces.

As Jackie and Steve began to comprehend this high contrast landscape, they also became aware of the faint sound of distant creatures. It gradually became clearer, resolving into a set of overlapping barks and howls. “What is that?” Jackie asked.

AMNOZ replied. “It resembles the howls of pack dogs, and based on the Doppler samples, they are approaching at roughly 50 miles per hour.”

“No, when will they get here? But for that matter, what do they eat?”

“Huh?” said Steve and Jackie, almost simultaneously. They looked up towards the the part of the shadowy black underside of the structure where the voice seemed to come from. 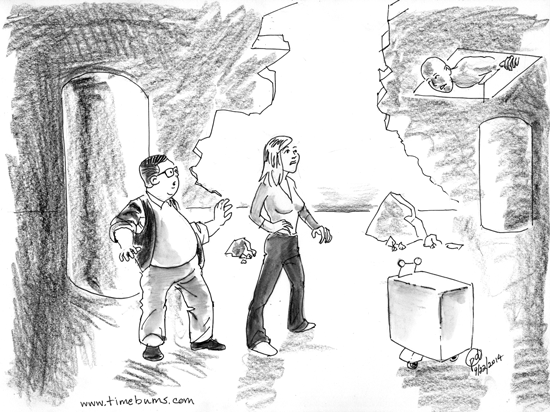 Bonnie Banks an' All 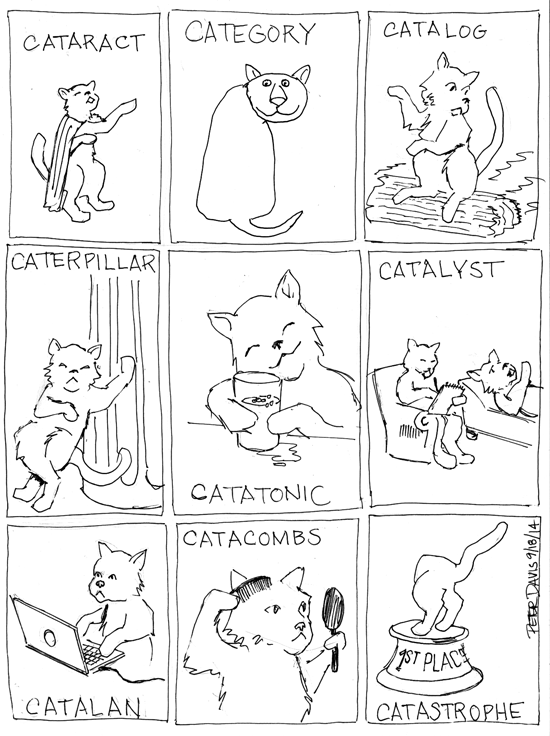 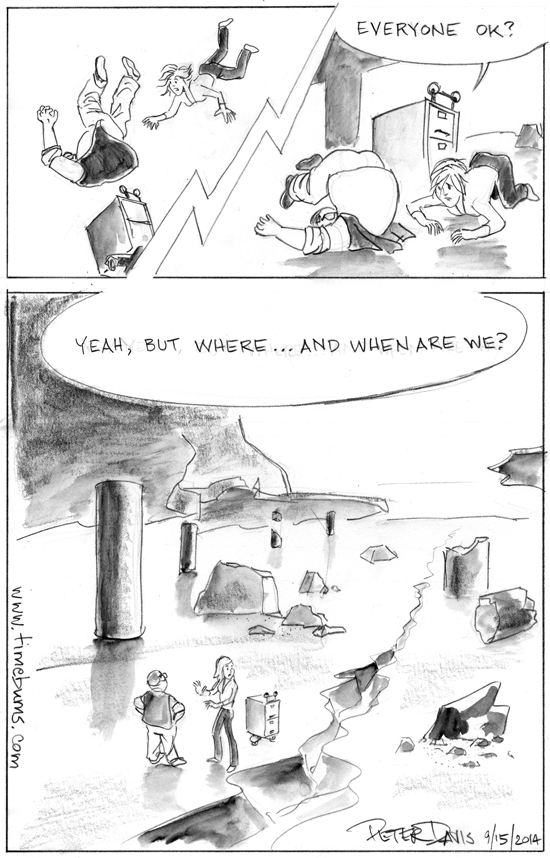 For Pistorius and for Ray Rice
Their misogyny has had some price
But they’re getting off easy
Considering how sleazy
They’ve been (if you want my advice.)

SEPTEMBER is the cruellest month, feeding
Nothing better than dead air, mixing
Reality and reruns, stirring
Eagerness for Fall programs.
Winter kept us busy, covering
Us with new shows, feeding
Our meager lives with the tube.
Summer amused us, coming over the Rizzolian Isles
With the show The Strain; we watched Crossbones,
And went on in Satisfaction, Under the Dome,
We Halted and Caught Fire, watched Power.
Wir verwenden keine RCN, wir verwenden Verizon, nicht Comcast.
And when we were children, staying up on weekends,
My cousin took me out on a sled,
And I was bored. He said, TV,
TV, what’s on tonight? And in we went.
In those days, television was free.
I watch, much of the night, and go to bed.

Episode 31 of “Time Bums,” normally seen in this slot, will not appear today, so that we can bring you the following special presentation.

I just didn’t feel like drawing a comic strip. I felt like going out and biking. This is the best time of year, at least in New England. The air is fresh and a little bit chilly. Trees are just thinking about turning colors. Kids don’t hate school too much yet. It’s wonderful.

You really should get out there and enjoy it. Close the laptop. Put down the phone. Get on your bike. Or just walk. Or sit. Feel the wind against your face. Seriously, do it now!

Ok, I knew you weren’t going to go out. But you really should.

Of course, this is from a guy whose about to have his innards whacked with radiation every week day for the next 7 or 8 weeks, so my priorities may be a little weird.

That Which We Call an Apple

But, in what was indoubtedly a typographical error, they went from cats to cattle with the name Mavericks. So theoretically, the next operating system should have been some adjective with Mavericks … Lazy Mavericks, Cool Mavericks, etc.

Instead, they went off in another direction altogether, calling their upcoming release Yosemite, which is either a national park or a boisterous Warner Bros. cartoon character. We’ll have to wait to see if the following version is called Yellowstone or Elmer.

Or perhaps it will be something else entirely, like Mozzarella.

While the whole Middle East is in Crisis
Just between al Qaeda and ISIS,
The really big flap
‘S over Facebook’s new app
Just for messaging mobile devices.

There’s no if about it. The only question is when. When will you get hacked? When will your accounts be violated, your identity stolen, and your most intimate nude selfies plundered and made public? You know it’s going to happen.

That’s why I’ve decided to release everything. I’d rather my personal information be revealed under my control, rather than at the whim of some hacker.

First, I’m a card-carrying member of the Barney & Friends Fan Club (though I can’t seem to find my card at the moment.)

For another thing, all my on line accounts use the same password: pjYbt6BTOYIHnyYNPnypnyINNNNnbvCUCCIBYRyGInouIhuutfrdresFTGH$&^%(YIUTFCUYTRITOIGN(itvuye45IRB&OypuibCEYWXCUTYVI^TBY&OHUBbboBOTVriTIIvt&EX$TRYCUUIYBVITIT

Finally, since this is going to wind up on some Web site anyway, … 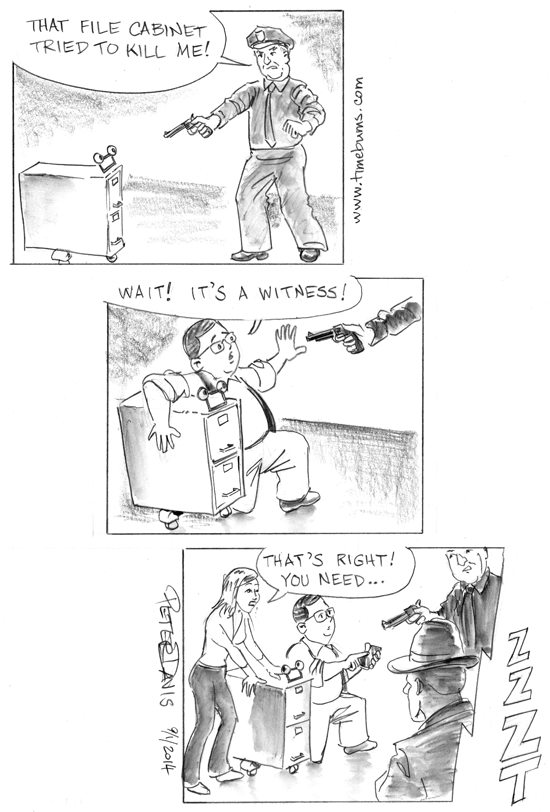