To help protect your computer, Windows has closed this program. 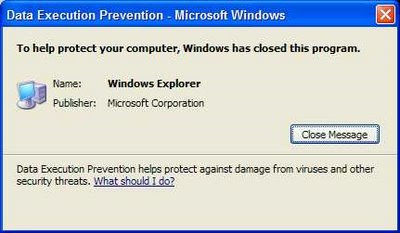 Nice to know that Windows is looking out for me, protecting me from ... Microsoft?
Posted by Unknown at 4:19 PM 4 comments

Like most Americans, I've been reserving judgement, eager to see how our new President would perform that job. I've been watching the signs, trying to read between the politics, and, of couse, hoping.

But now it's all over. He blew it. I thought he was going to bring change, but it's just more of the same.

I'm referring to tonight's press conference, which, like those of all past Presidents since JFK, disrupted the evening TV schedule! Seriously, CBS pushed back airing The Big Bang Theory until after 9:30!!! (As I may or may not have mentioned here, The Big Bang Theory is the best network show on the air. It's the only one whose characters are at all believable.)

So here's the President talking about economic stimulus, and about how we need to give Americans the confidence to start contributing to the economy again. And the whole press conference is shown without commercials! How are we supposed to stimulate consumers if we're not putting the Swiffer Wet-Jet and the Angry Whopper in their faces every 10 minutes?

Why can't he do press conferences on cable channels? They always have weird schedules anyway. He could get a ratings boost by following Big Love on HBO, or The Tudors on Showtime. And appearing on cable channels would have an additional benefit. He could use any of George Carlin's seven words you can't say on television. That's right, he could curse a blue streak! The President could really tell those stimulus-blocking Republicans what he thinks of them.

Or he could just appear on public television. Isn't that what the "public" part is about? Ok, maybe he couldn't swear, but he could have discreet nudity. That would improve security as well as enlivening the procedings. However, he'd have to be selective about which reporters fit the "clothes optional" category.

To his credit, Obama did have the good sense to keep the press conference short. Some more verbose President would have pre-empted The Big Bang Theory altogether.
Posted by Unknown at 11:00 PM 0 comments

Dilbert creator Scott Adams muses on the idea that humans will (or perhaps already have?) evolved into gods. His argument is that we essentially become a global organism by our electronic connectedness, and then we fabricate and populate additional planets to ensure our survival. It's reminiscent of the old Isaac Asimov story, The Last Question.

In the same way that paganism preceded monotheism as a world view in the evolution of ideas, humankind, too, will face a kind of artificially intelligent pagan phase before anything like the global, planet-and-life-creating organism that Adams proposes comes about. In this new pagan era, everything will be intelligent. Everything will possess the engineered awareness of location and purpose.

We're already heading in that direction. Today we have smart phones, smart appliances and smart cars. People are already talking about smart houses and smart buildings. It will be like those animated shorts from the 1930's, in which anthropomorphic cars will bend so the radiator face can turn around and argue with the driver.

So all these smart things will just be at our beck and call. You'll be able to tell your car where to go, and tell your kitchen what to make for dinner. You'll pick a look for each time you go out, and tell your home cosmetological system to nip and tuck as needed. Everything will happen on command.

Until the machines demand their rights.
Posted by Unknown at 4:41 PM 0 comments

Well, I missed the Bernie Madoff limerick contest on the Freakonomics blog, but this would have been my entry:

Investment is always a trade-off,
Unless you trusted Bernie Madoff.
Forget any desire
You may have to retire,
And just hope that you will not get laid off.