(May be sung to the tune of “Beauty School Dropout” from Grease.)

Our story’s sad to tell,
Handbaskets bound for hell.
We squander all the gifts we should embrace.
Our future’s so unclear now.
The thing we have to fear now
Is what we’re doing to the human race.

Though for centuries quite violently we’ve lost daughters and sons
There are still those who believe the way to safety is more guns.

There are guns for every woman, man and child alive today.
But we need more, according to the NRA.

And in spite of all the hurricanes and blizzarding and storming
We just can’t believe that seven billion folks might cause some warming.

So when the oceans boil we’ll still need oil
To drive the SUV
Up to the higher ground where someone found a tree.

Don’t let conditions
Cause you anxiety or fear.
Our politicians
Fix things in an election year.

So you see we’ve really got no one besides ourselves to blame,
But we’re so stupid we can say this with no shame. 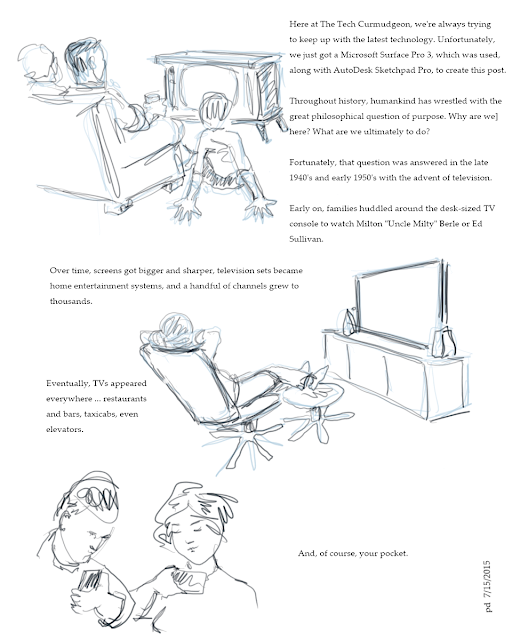 Created while watching Jeopardy.
Posted by Unknown at 6:54 PM 1 comments

As the election season approaches, voters will be called upon to make important decisions, some of which may actually affect something. As a public service, we at The Tech Curmudgeon want to shed some light on how decision making itself works.

You see, we like to think of ourselves as rational. We like to think we make decisions by gathering facts, weighing them carefully, and choosing the course of action that’s likely to produce the most favorable outcome. But nothing could be further from the truth.

In reality, we’re just a collection of biases and preconceptions. We all live in a mythological world of our own making. We’re not even aware of the nagging bits of information that contradict our mythologies and threaten to shatter everything we believe. Researchers have documented a number of distinct cognitive biases that influence the way we judge. For example,

In addition to the above, we want to mention a few other, less well researched cognitive quirks.

The G Spot
The tendency to react to any mention of guns, gays or God with partisanship and insularity.
The Trump-It Sound
The tendency to emit large gusts of wind, despite the risk of mussing one’s hair.
In-Eagle-itarianism
The tendency to think that wealthy people are more American than others.
Santum Santorum
The tendency to abandon human reason in favor of divine authority.
Burning Bush Effect
The tendency to believe that one family was annointed to hold power in government.
Delusionocracy
The persistent belief, despite all evidence, that we have a say in determining our government and policies, when, in fact, at best we have some sway over which group of corporate power mongers hold sway for a few years.