People Who Are People

On the other hand, if corporations were people, they might have a different opinion of what people are, so that’s a circular argument.

Corporations do not have the same interests and motivations as individual people. Corporations exist for one purpose only … to make as much money as they possibly can. People, in contrast, exist to eat junk food, have sex, watch TV AND make money. In many cases, those interests are in direct conflict.

And if people have basic rights … the so-called “inalienable rights” … then so do countries. Countries, too, are entitled to life, liberty and the pursuit of happiness.

So what does “happy country” mean?
Posted by Unknown at 5:02 PM 0 comments 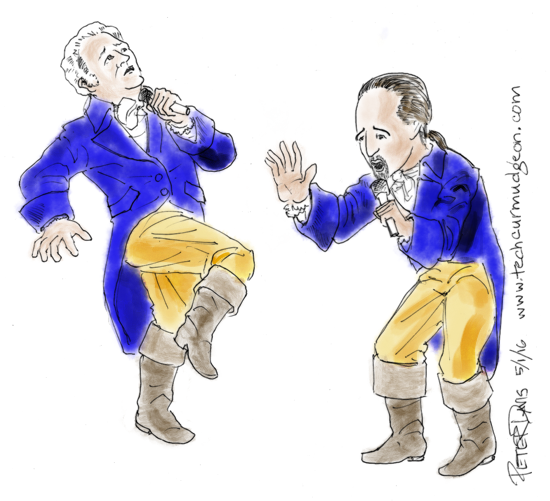 
If you go to Ticketron.com, find the link and click it
You can shell out several thousand for a Hamilton ticket.
Otherwise it’s no surprise there’s a years-long waiting list.
The show’s no flop, but our synopsis here will give the gist.

You see, Hamilton (known as Alexander to his friends),
An economist whose means didn’t justify his end,
Was an out-of-wedlock kid from a Carribean stork,
So he got some education, relocated to New York.

There he met Lafayette and he met Aaron Burr
And he met Eliza Schuyler and wound up bound to her.
He wanted to help in the creation of our nation
But to grow we had to throw off English colonization.

So he joined the Revolution, hoping for his own command
But what sucked was he got stuck being Washington’s right hand.
After France joined the war, he got his chance to do more
And American forces finally settled the score.

After the war, a lot of other stuff happened,
Non-critical … political … a load of boring crap, and
Hamilton backed Jefferson against Burr in a tie
So Burr duelled him, cruelly shooting him, and that’s how he died.

Well, this was really fun, but I’m thinking that next time
I’ll pick someone else whose name is easier to rhyme.
Posted by Unknown at 12:00 AM 0 comments