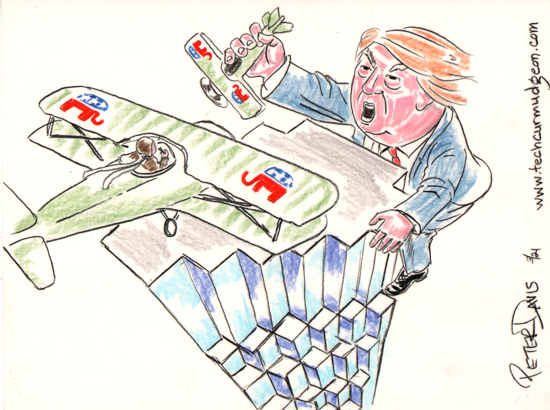 State of the Prostate (Update)

I’ve always been aware of cancer. I thought the definition was:

cancer
(‘kansər) n. An often fatal disease that other people may get in one body part or another.

The keyword is other. This is supposed to happen to people on TV or in the news. Sure, I’m sorry to lose a David Bowie or an Alan Rickman, but hey, they’re not me.

And body parts? If you follow the social media, breast cancer is the trending one … the meme. You see pictures of joggers with their pink ribbons running through big arches of pink balloons. But you don’t see anyone racing for prostate cancer, past tall columns of blue balloons.

Prostate cancer is supposed to be like cut, cut … ok, you’re all set. Have a nice life.

When you first get a cancer diagnosis, it’s like being hit by a meteorite. It’s random … unpredictable.

Of course, you immediately (well, after you get past the denial) start rationalizing. What did I do wrong? How could I have prevented this? Too many carbs? Not enough exercise? The answer is: Probably all of the above, and then again, no. This is not like heart disease or diabetes or one of those other conditions the medical establishment loves to blame on the patient. Cancer gets you some slack. Doctors blame it on your genes, so you’re off the hook. You can’t help your genes, right?

In fact, if you’re male, your odds of getting cancer somewhere at some point in your life are 1 in 2. If you’re female, 1 in 3. So other guy, you owe me!

But it’s not completely random. Cancer does have a purpose. It’s purpose is to make you stop and think “What am I doing with my life?” If you don’t have cancer, it wouldn’t hurt to think about this anyway.

In this season of ratcheted rhetoric, when candidates and commentators are flinging superlatives about like candy, it’s important to try to restore balance to the language. Toward that end, we want to document and popularize a little known linguistic showpiece … the sublative.

Thinking back to high school, you may remember learning about the superlative … that form of adjective that indicates the most extreme condition of something. A movie may be good, but not as good as one that’s better. Nothing, however, is as good as the best movie. That’s why the MPA gives awards for Best Picture and Best Performance By an Actress in a Leading Role and Best Guy Who Sweeps the Film Clippings Up From the Cutting Room Floor. (Actually, there are no film clippings with digital movies, but try telling that to the Guys Who Sweep union!)

So with awards and competitions all around us, we naturally give a lot of attention to bests and other superlatives. But there’s also a linguistic converse of this. And no, it’s not worst, which is really just the best at being bad.

No, the linguistic converse of the the superlative is the sublative. To recognize it, note that superlative adjectives frequently end with -est: best, smartest, hairiest, etc. Similarly, sublative adjectives often end with -ish: good-ish, smart-ish, hairy-ish, and so on. And just as superlatives mean “to an extreme degree,” sublatives suggest a more bland reaction, a kind of verbal meh.

NOTE: Be careful not to mistake “delicious-ish” for “delish.” The latter is just a presumptuous little abbreviation.

So next time you feel overwhelmed by the intense-ish language that spews from the mouths of brash-ish politicians and know-it-all-ish commentators, think careful-ish-ly about this.