If you like Brits, including upper class twits
Then you can always watch Downton.
Who'll Mary marry? And will Tom go or tarry?
Just be sure to watch Downton.
So Gillingham and Charles both want to be in Mary's love life.
They both seem sweet, but soon she'll meet that lawyer from "The Good Wife."
What can you do?
We know that she likes lawyers,
But really we count for nothing, we're helpless voyeurs
Around Downton.
It's what we all adore. Downton.
Like Daisy and Patmore. Downton.
Or Robert and Cora.

Late in the season everybody's got reasons
They might stay or leave Downton.
Julian Fellowes writes both farewells and hellos
In the plots he weaves. Downton.
Like one bloke who supposedly survived from the "Titanic."
Or Edith's beau whom now we know was offed by thugs Germanic.
Strange ways to go.
The lives are much shorter there.
Between the wars and disasters, there's death in the air.
Beware Downton.
All turns to crisis fast. Downton.
Even poor Isis passed. Downton.
Granny will have the last laugh.

(instrumental)
So Edith took her daughter from the family of that herder.
And one Bates or another surely will stand trial for murder.
What do you know?
There's much that's behind closed doors.
That's where the action is brewing on all of the floors.
Let's watch Downton.
Thomas may be alright. Downton.
Carson and Hughes are tight. Downton.
That's where your Sunday night goes.

Critics seem to have overlooked this unpretentious little snowstorm of Feb. 21-22, 2015, but the charm is undeniable. Compared with the blockbuster action storms released earlier this season, this quiet production offers engaging visuals and more character development than we’ve come to expect from these events. The progression from cold and dry to warm and moist takes place with meticulous precision, and yet we’re still surprised by the sunny ending. And unlike the earlier special effects extravaganzas, this sincere effort trades in human values at a human scale. 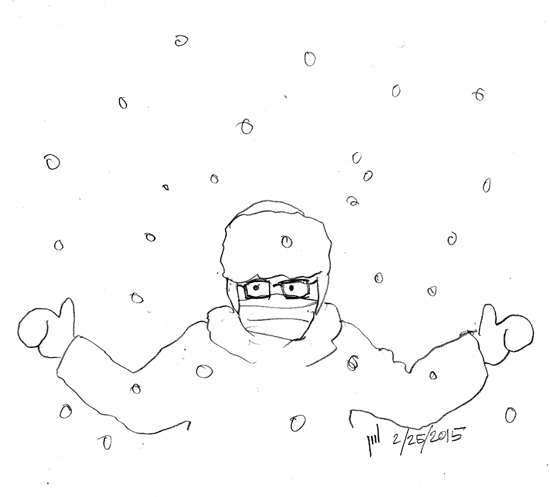 WTF: What is the best email program?

A couple of weeks ago, I wrote about the sad state of email. In response, Ruth in Michigan asks:

Question: What IS the best email program?

There are many different email programs (call them clients if you want to sound like a knowledgeable geek), but they fall into two categories:
The Web-based ones include the very popular GMail, Google's free email service that works in any browser as long as it's Chrome. You can also read GMail with other email programs, but you have to be geeky enough to know words like client. Anyway, reading GMail in Chrome isn't so bad, as long as you don't mind:

On the other hand, the not-Web-based programs have some issues of their own. Thunderbird is one of the more popular of these, especially because it pretended to replace a popular one called Eudora when the Eudora people got bored and stopped working on it. Thunderbird wasn’t really a Eudora replacement, but it did come in at the same price-point ... free.

Thunderbird can be set up to read email from a bunch of different email services, including GMail, and there’s plenty of information on the Web about how to do that. I won't repeat that, but just mention that Thunderbird works with something called POP3 (post office protocol) and with something else called IMAP (Internet Message something something), so whatever you chose, it will probably be wrong.

Of course, you may be stuck using a program called Outlook, from the good people at Microsoft. Outlook was designed to talk to a Microsoft mail server, called Exchange, using a Microsoft language, called MAPI (Microsoft’s All-Purpose something-that-starts-with-I-and-I-don’t-think-the-all-purpose-part-is-right-either.) If your employer or loved one or other important person is using Exchange, just use Outlook and deal.

Remember to send your questions to wtf@techcurmudgeon.info, and we will promptly respond to, though not necessarily answer, them, usually with sarcasm, irrelevance and perhaps a smattering of humor.
Posted by Unknown at 12:00 AM 2 comments

The End of Things

When Thomas Jefferson first penned The Declaration of Independence, the inalienable rights in the catchphrase were life, liberty and property. He changed “property” to “pursuit of happiness,” probably because the idea of a right to property sounded too Socialist. Smart guy that he was, he was already anticipating a presidential run 13 years before the Constitution created that office.

But property has long been the defining measure of success. Citizenship and voting rights have often been tied to land ownership.

And this is why it’s so disruptive that things … objects, are now obsolete. It started a while ago with e-books and music downloads. We were weaned off disks and CDs for software, instead just downloading it (and the twice-daily updates) from the Internet. But even that rug was pulled out. Now the software just lives on the Web. And more and more, we don’t buy software or books or music outright. We subscribe.

Even cars and hotels are being virtualized by Uber and Airbnb. Clothing next?

The pattern is that we begin to think of things not as objects, but as experiences we can have. Books are not bound bunches of pages, but just texts that we can read in various forms. Photos and music are sets of samples of digital information. Cars become trips. Homes become stays.

And humans? We are but thinking machines.

I have long maintained that email is the ultimate killer Internet app. (It’s starting to be nudged out of the top spot by texting, which lets you answer the phone without actually having to talk to someone. However, texting is arguably not an Internet app.)

The beauty of email is that it’s not just for sending cat pictures to friends. You can use it for everything. You can send yourself reminders, notes, etc. If you use GMail or some other Web-based mail, you can send files to yourself as a way to keep backup copies. In fact you can send yourself anything … photos, videos, links to cool web sites, etc. … and call it whatever you want. It’s the world’s simplest filing system.

For example, whenever I get an idea for a post for this blog, I send myself a note about it, and I put “[TC]” in the subject line. Then GMail automatically (well, because I told it to) puts it in a separate folder with a blue label. When I’m done with that idea, I move it to a “Done” folder and mark it with a black label. Same for other blogs, to do lists, or whatever else I struggle vainly to organize.

Which leads us to the first problem … mail reading software sucks.

Believe me. I’ve tried damn near all of them, ranging from the extremely geeky ones named with all lowercase letters (e.g., mutt, gnus) all the way to the supposedly modern user friendly ones like GMail and Thunderbird.

The geeky ones are very reliable, but painfully difficult to set up (even if you’re a geeky type). Once you get it working, don’t ever change anything … email address, computer, etc. … for the rest of your life.

Also, because the geeks who remember when email was created are very old school, they refuse to put support for moderns things like formatted mail, pictures and attachments in these programs. The only email they read is what looks like it was typed on a 1960’s vintage Smith Corona.

Newer email programs, like GMail, are Web-based. You read them in a browser like Chrome, Safari, Firefox, etc. One problem is that sending or replying to a message means entering your message in a browser text box. That’s about as rewarding as … well, as typing on a 1960’s vintage Smith Corona.

But a worse problem is that GMail lumps all the messages on one topic into conversations, without regard to which message was a reply to which other message. If you had a conversation like:
GMail will display that like this:
And that’s not even including people who hijack an ongoing discussion to talk about something else entirely, which also gets lumped into the conversation.

Which brings us to the second problem … people are stupid. I don’t exclude myself from this, but my position as Curmudgeon Public requires me to be ruthlessly critical of human foibles, failings and other f words. And there’s no better display of human folly than email groups (called listservs after a 30 year old piece of software that most people never used.)

All of which goes to prove that when there’s a big snowstorm, I have way too much free time.

If your dot com site gets any traction,
It’ll be due to great interaction.
From the Web interface
To the cloud database
Usability’s the main attraction. 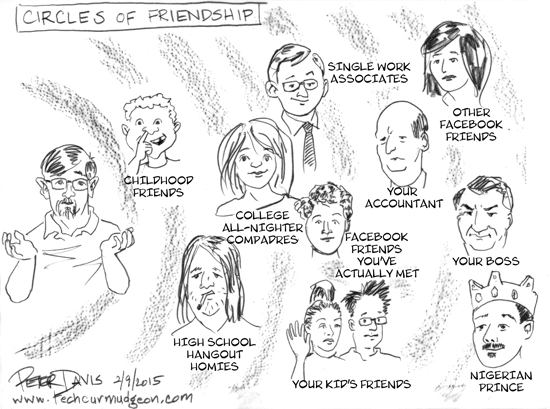 If you live in some kind of community
Then your kids should get vaccine immunity.
Your misguided defiance
Of medical science
Should not be allowed with impunity.

First, let me say at the outset that despite strong temptation, I will refrain from using any pi/pie puns in this post. In fact, nobody says “pizza pie” anymore anyway.

For a long time, I've realized that a large (e.g., 16”) pizza is actually qualitatively better than a small (e.g., 12”) inch one. However, I had failed to demonstrate this with mathematical rigor. I shall now correct this oversight.

The important point is that regardless of the pizza diameter, the crust is always about an inch wide. That means that a 12” pizza really has a covered area that's 10” in diameter, while a 16” pizza has a 14” covered area. 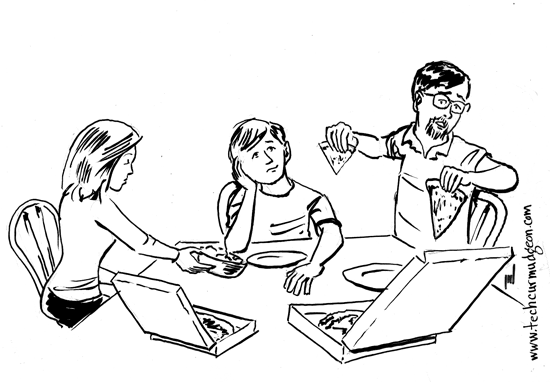 1Unless you don't eat the crust, in which case none of this matters.
Posted by Unknown at 9:33 AM 0 comments