Bill Gates is no longer at Microsoft.  Google is run by a small team of unknown nerds.  Even after being the subject of a hit movie, Mark Zuckerberg is not the "face" of Facebook.

But Steve Jobs IS Apple.  It's hard to think of any individual executive so closely associated with his company's brand.  (Jim Perdue definitely lacks his father's strangely charismatic blandness.)  Even his alter-ego as Disney/Pixar Steve Jobs doesn't dilute his Apple appeal.

So when he's out on medical leave, people worry about the fate of Apple.  To help ease the anxiety, I think it makes sense to publish a guide to being Steve Jobs, so someone else can step up and fill the role.  To begin with, let's talk about the aspect of Steve Jobs that's probably most instrumental in Apple's success ... being a design-y guy.  Apple's success hinges more on its product design than anything else, so let's start by explaining how to design an Apple product.

2) No controls!  No buttons.  No keyboards.  No mouse.  No stylus.  Ok, if we absolutely have to have a keyboard or mouse, make it look like a piece of glass or aluminum.

5) Cute.  Must be cute.  Things on screen should swell with pride when you go near them, and literally jump up and down when you touch them.  UI is all done with colored jelly beans.

6) Did we mention no Flash?

7) No user serviceable parts.  Not even a battery change.

8) No sharp edges or corners.

9) Make it any color, as long as it's black, white or silver.

10) These are today's rules.  At some point, some other rules will be in.  Then discard everything here, and follow those rules without mercy.

With these rules, soon you too will be able to run ads like this ... 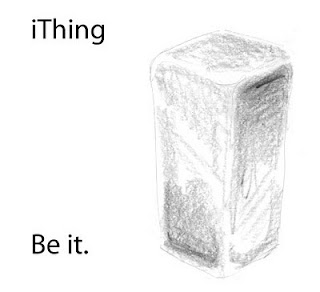