How the Internet Works (When It Works!) 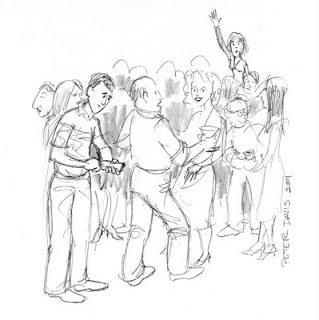 The Internet allows computers to talk to each other. Duh. The technology behind this is called packet switching. The idea is that any message, no matter how big or important, can be split up into packets. These packets then get sent, along with a lot of other packets from other people's messages, across the Internet. Because each packet is carried separately, the pieces of your message might take different routes from computer A to computer B. They could arrive at different times, and out of order.

Suppose you were writing a long note to someone across the room at a crowded party. As you finished writing each page, you'd tear off that page, fold it in half and write your friend's name on the outside. Then you'd hand it to someone next to you, and ask him or her to pass it to your friend across the room. Of course, for each page, there may be a different person standing next to you, and all the other people in between you and your friend may have moved around too. Better number those pages.

The cool thing about this is that no one's in charge, telling the others what to do. It's all just a bunch of individuals following a few basic rules to be nice. If there were an earthquake, and half the room fell into a crevice in the earth's crust, you could still pass notes (as long as your friend were still there). Of course, the notes might take a completely different route around the hole in the ground.

No doubt you've already spotted one problem with this. Other people at the party could open your notes and read them. That's called packet sniffing. Because each packet only has part of the message, that may not be a problem, but if your message is short, or the same person happens to wind up with several pieces, it could get ugly.

The other problem is that the people at the party will think you're a jerk for passing notes at a party. Besides, who writes notes anymore? Just text!
Posted by Unknown at 7:08 PM