The weather in New England is getting gorgeous (ignoring a few tornadoes), so my thoughts have turned, as they do every year, to biking. Specifically, I want to use a bicycle instead of a car for as many purposes as I can. Most of my errands are local anyway, and biking is almost as fast, if not faster, than driving. Biking also reduces stress, gives you exercise, and gets you exposed to nature, especially in the form of bugs and bird poop. 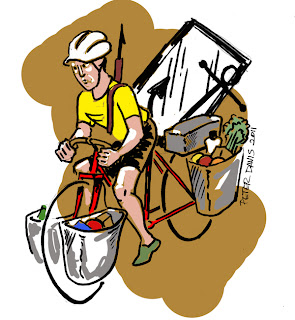 However, there are three concerns: parking, carrying stuff and not getting killed by cars. That last one is rather important to me, as I have quite a Netflix queue built up.

The parking problem is that you can't simply get off your bike and leave it around when you get to a store or restaurant or someplace. There are others who covet such things, and a bike can conveniently serves as both stolen goods and getaway vehicle. You can, of course, lock it, but that means carrying big, heavy locks around. It also means you need something at your chosen spot to lock the bike to. (A  skilled and determined thief can simply toss your locked bike in the back of an SUV.) There are frequently bike racks, signs, lamp posts and other objects around, but not always where you need them.

I've thought of carrying a boat anchor around, and just dropping it to the sidewalk when I want to leave my bike for a while. (Make sure to stop the bike before doing this.) Of course, it would have to be a pretty heavy anchor, and that might be awkward. A better option would be a harpoon gun. I could fire a harpoon into a nearby tree, sidewalk or parked car, and then lock the bike to that.

The second problem is cargo. How do you carry a week's worth of groceries, or a new HDTV? It would be nice to have a big trunk or cargo bay, but that too would pose a security problem. It could make balancing the bike pretty challenging too.

There's a wide range of bags designed to mount on just about every part of the bike not otherwise occupied by person. These include: panniers (on either side of the rear wheel), trunk bags (above the rear wheel), front panniers (on either side of the front wheel), seat bags (under the seat), handlebar bags (Do I really have to spell it out for you?) and, of course, the backpack. A fully loaded bike heading down the street looks like an attack by a giant fuzzy slipper. Of course, you have to remove and carry all these bags when you lock the bike up someplace.

Then there's the matter of not getting killed. Many cyclists deck themselves and their bikes in reflective tape and flashing lights, creating that festive holiday look just about anytime. I think bike-mounted AK-47s would be more effective, but there are some legal restrictions on these. That boat anchor might come in handy here as well.

But on a more practical note, the keys to bike safety are:
I think there's a marketing opportunity for a stunt cyclist to teach others how to fake being hit by a car.  The massive insurance awards in these cases might make drivers think twice about being reckless around bikes.  (Nah!)

Probably the best solution to all of these problems is to get a bike that's like a car.  It could have a large car-type body.  It would be too big to be thrown into an SUV, and could have an actual trunk.  It would be as visible as a car, and the body would offer some protection to the cyclist.  And if it's too heavy to ride around with, you could put an engine under the hood.
Posted by Unknown at 4:18 PM