I've been holed up in my office all day, so it's time to come out and see if I can see my shadow.  Not being a groundhog, though, I'm lacking in predictive powers.  If I see my shadow, it just means there's more daylight left.

On this date, the groundhog, or historically a bear or badger or other animal, either retreats back into his burrow, frightened by his own shadow, or else sallies forth into the world to start ... well, whatever it is that groundhogs do in the Spring.  This is an ancient custom, practiced even among pagan groundhogs during the Middle Ages and earlier, though contemporary folklore is inextricably and inexplicably bound up with actor Bill Murray.

Most observers, however, fail to realize that groundhogs do not predict weather so much as control it.  The duration of winter actually hinges on the groundhog's decision to either go out or stay home.  This is why groundhogs are now being intensely studied as possible instruments of climate change.  The National Science Foundation is funding studies in which large populations of groundhogs are exposed to computer simulated shadows, in an attempt to reverse global warming.  Preliminary results are inconclusive, but the sight of all those groundhogs wearing virtual reality glasses is quite overwhelming.

Another theory posits that groundhogs are actually descendants of an alien race, perhaps the same race responsible for the mysterious crop circles in England.  As this photo reveals, they are well on their way to the subjugation of human kind. 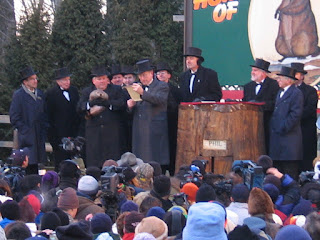