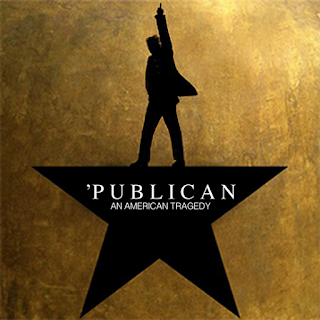 BERN:
How does a snot-nosed red head, son of a Fred and a
Scotswoman, dropped in the middle of a
Not rotten spot in Jamaica, Queens, a family of means
Privilege and class
Grow up to be a narcissistic dumbass?

ROMNEY
Fred, son of German immigrants, collecting rents
From the Jews, thought the news
Of his German ancestry
Might not agree with their views
So he claimed to be from Sweden
And the tenants acceded.

PRIEBUS
And each day, the kid broke rules, was a real trouble maker.
Went to military school to be a mover and a shaker.
Studied real estate at Wharton, became a consummate faker.
Missed the Vietnam War, though he’s certainly no Quaker.

HILLARY
Put some dough in a show ‘cause he thought it’d be fun.
It flopped so he dropped it. Joined Liz Trump and Son.
Plenty of real estate that he had to run.
Learned the art of the deal, when all’s said and done.

BERN
Well, the word got around, they said “This guy is insane, man”
No one believed he had a serious campaign plan
Flying around in an unregistered plane, man.
Giving himself a bad name. What’s your name, man?