You may be familiar with the old parable of the blind men and the elephant. 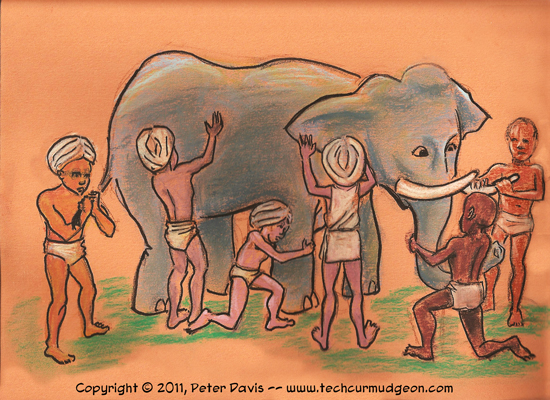 The gist is that a bunch of blind guys check out this elephant, but because each one finds a different part of the elephant, each has a totally different idea of what an elephant is. The guy with the tail thinks an elephant is like a rope. The leg guy thinks it's like a tree. The trunk guy like a snake, etc. That becomes the take-away from their elephant encounter. From then on, whenever one of them thinks of an elephant, he'll think only of the part he experienced.

That's how our individual realities are formed. We each have experiences that lead to different concepts about what the world actually is. None of them is right or wrong. They're all partly right, but mostly wrong, because our experiences are so limited. We're all blind.

As we grow, we can add to these experiences. The tail guy may get the trunk next time he bumps into an elephant, and little by little, form a more complete idea of what an elephant is. But his first reaction is likely to be "That's not an elephant!"

The point that's usually missed is that each of the blind men relates the elephant to something already familiar ... rope, snake, tree, etc. That's pretty much how new experiences get assimilated. Once we reach some level of awareness, anything new gets interpreted as being like something we already knew.

That causes our individual realities diverge to more and more. As we relate new, complex, unusual phenomena to different familiar ones, our personal views of the universe grow further and further apart, until we're like the Republican presidential nomination process.
Posted by Unknown at 12:01 AM