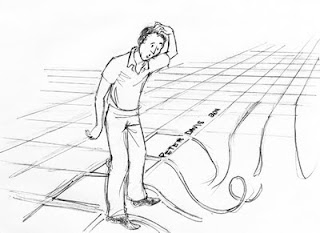 This year, New York City marked the 200th anniversary of the street grid system ... the famous avenues running up- and downtown, and streets running cross-town. That system has made it possible for New Yorkers and visitors to find their way around hectic mid-town Manhattan ... as long as they don't go below 14th street, where all bets are off. That's because most of that area was already settled with twisty winding roads before the big plan of 1811. (The other boroughs are also challenging for the navigation-impaired.)

The beauty of the grid is that you can basically count blocks in the East/West and North/South directions to know where you are. Streets and avenues are (mostly) conveniently named to give you your location: Fifth Avenue, 42nd Street, etc.

It also kept them from having to build weird stuff like this: 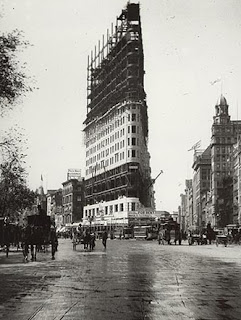 It's no wonder Broadway is the theater capital, since it slashes dramatically through the grid on a diagonal.

The idea of using grids to specify location is commonly attributed to René Descartes, the French philosopher and mathematician. He's the guy who said "I think, therefore I am," so he must have been pretty smart. (Or at least he thought he was.) Actually the concept can be traced back even further, at least to 5th century BCE urban planner Hippodamus of Miletus.

We use this idea not just for physical locations, but logical ones. Think of a table of data. Frequently, the rows and columns are in a particular order, indicating a progression of ideas along the horizontal and vertical dimensions. For example:

This manages our expectations, so we're surprised to find, in the lower right cell, that the 'p' is bold.

Whole games are built around this idea.  The chessboard is obviously a grid.  In fact, the old convention of noting chess moves in terms of pieces (e.g., "pawn to king 4") has been more or less replaced by just specifying the starting and ending squares ("e2-e4.")